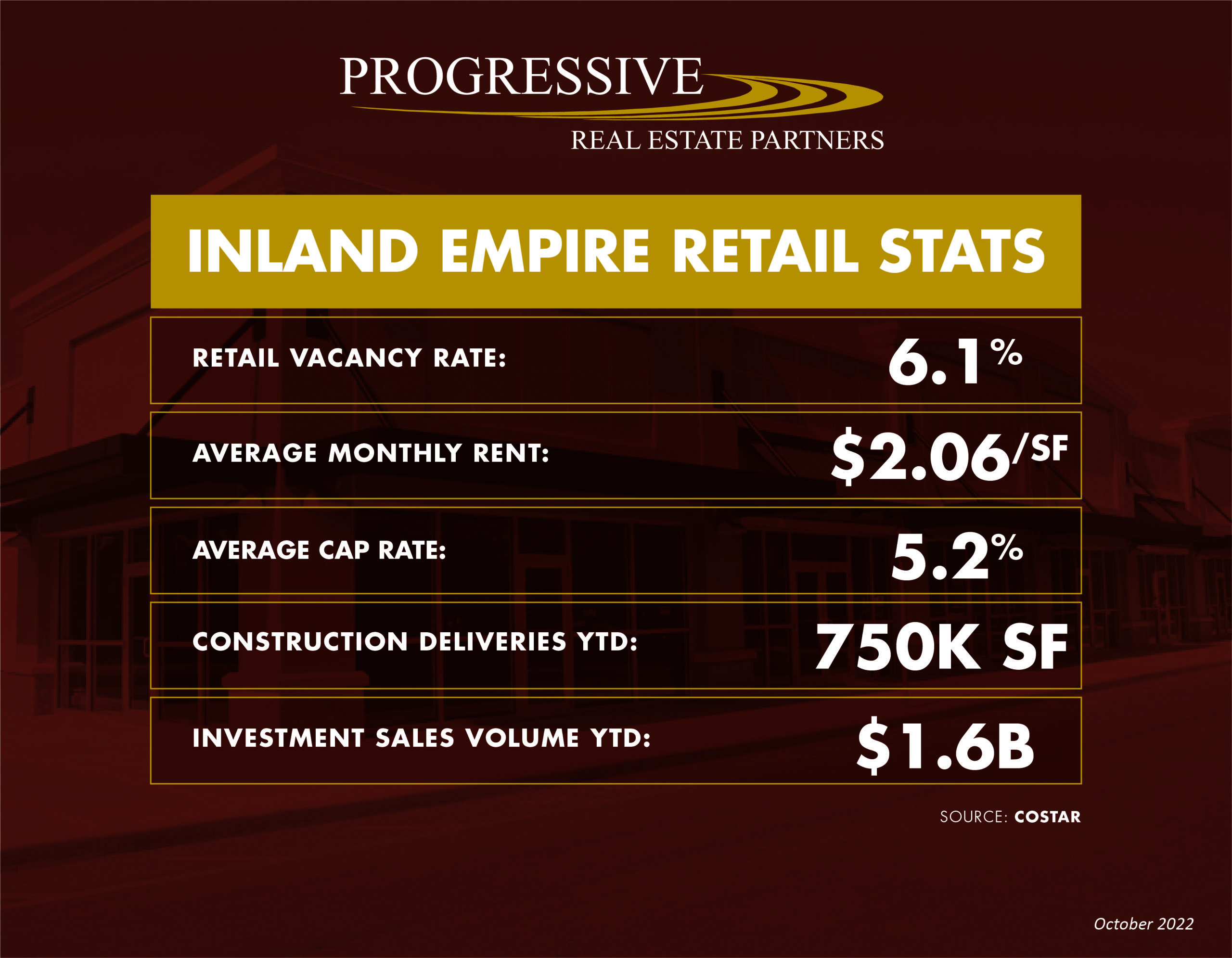 Many members of the Progressive Real Estate Partners team just returned from ICSC’s Western Conference in San Diego which happened to coincide with the end of the 3rd quarter of 2022. Some of the phrases most often heard or discussed at the conference included: “Change”, “Choppy Waters”, “Expansion”, “Higher Construction Costs”, “Lack of Good Space” and “Cap Rates Have to Rise”.

Let’s take a deeper dive into these ideas as well as a few others based upon my latest observations of Southern California’s Inland Empire retail real estate market.

We will start with metrics of the leasing market as these materially affect the capital markets.

Record Low Vacancy Rate: While certain retail may be dead MOST is not. After hitting a 12 year low of 6.6% in 2019, the Inland Empire now boasts an even lower vacancy rate of 6.1%. That trend is well illustrated by our team’s leasing activity over the past couple years which has included replacing a Kmart with a Target and Planet Fitness; a Walmart with a Fitness 19, Harbor Freight Tools, and WSS (still about 40K SF to go), Bed Bath & Beyond with Nordstrom Rack, and Joann Fabrics with Big Lots. We also recently leased three other buildings that had been vacant for a minimum of 8 years each. Planet Fitness, Fitness 19, and Kids Empire took these spaces.

Record Low Deliveries: I don’t like to utilize CoStar’s “construction” data for retail since if someone is planning a 200,000 SF center and they start construction on a small part of it, Costar might report it as 200,000 SF under construction. Instead I like to focus on deliveries which is newly constructed space that is actually delivered to tenants. Year to date, there has been only 750K square feet of space delivered. This is on a base of over 190M square feet in the market. The past three years has seen combined deliveries of LESS than 3M square feet. This compares with 2006 – 2008 deliveries of over 19M square feet. What is driving the lack of new construction and deliveries is fewer large retailers wanting new space combined with the substantial increase in construction costs. The increase in construction costs is not just driven by materials and labor, but also by city and environmental requirements, utility connection fees, and pretty much every component that goes into the development process.

Mostly Rising Rents: Across all retail, Costar reports average base rents have increased from $1.51/SF/month 10 years ago to $2.06/SF/month, plus NNN today. Anecdotally, we are observing a lot of strength for the best-in-class shop space. We have signed more leases at over $4.00/SF/month this year than we ever have. We also have plenty of properties where we are still signing leases between $1.50 to $2.50/SF/month, but we are definitely seeing more leases above $2.00/SF/month than below this amount.

As stated above, anchor and sub-anchor spaces have been leasing, but mostly at similar lease rates as seen over the past decade and therefore are not driving up the average leasing rate. The key with these leases is to look at the effective rate. Anchor and sub-anchor tenants are seeking large tenant improvement packages and substantial landlord work which is driving down the effective rent. We are seeing base rents of $12 to 18/SF annually for such spaces, but landlord costs of $30 to $70/SF are not unusual. With triple net charges of approximately $6.00/SF/year, the payback period can be 2 to 3 years.

Declining Investment Sales Volume: Different perspectives on the short-term future of the investment markets has resulted in a decrease in velocity. Over the first three quarters of 2022, sales volume has been $607M, $552M, and $452M respectively (totaling $1.6B). Although declining, sales volume is now much closer to the approximately $400M/quarter that it has averaged over the past 5 years. The reality is that sales volume has been substantially above average for the past 12 months.

Cap Rate Uncertainty:   Average cap rates across all retail product in the Inland Empire fell substantially from approximately 6.5% at the start of the pandemic to most recently 5.2%. But cap rates are reported in the rearview mirror. Deals that closed in the 3rd quarter were mostly agreed upon in the 2nd quarter. With rising interest rates and the threat of an economic slowdown, many believe that cap rates should be rising (those are the buyers). But high inflation, low construction, and rising lease rates would indicate that cap rates can stay at current levels and investors can still achieve very positive long-term return on their equity (can you guess whose perspective this might be). It is this push & pull of ideology that will determine the direction of cap rates.

National Economy is Not the Local Economy: As someone who leads a company whose results are tied to the economic health of the Inland Empire market; I am constantly reminded that national figures do not necessarily reflect the local markets. Although interest rates are national, jobs, population, income, and many other figures are not.

Within the past week, University of California Riverside hosted its 2022 economic forecast. Some highlights include:

Forecast and Advice: I am often asked to make predictions and forecasts about where I think the Inland Empire retail world is heading. I am not going to make any forecasts, but I will say that in my 30 years of working within this market, this is amongst the most confusing of times. There are so many factors going in so many different directions. So instead I will offer some advice which is to keep leverage low, keep properties well maintained, stay in touch with those active in the market, and do what you need to do maintain your occupancy.  And if our team can of service please reach out to me at brad@progressiverep.com.