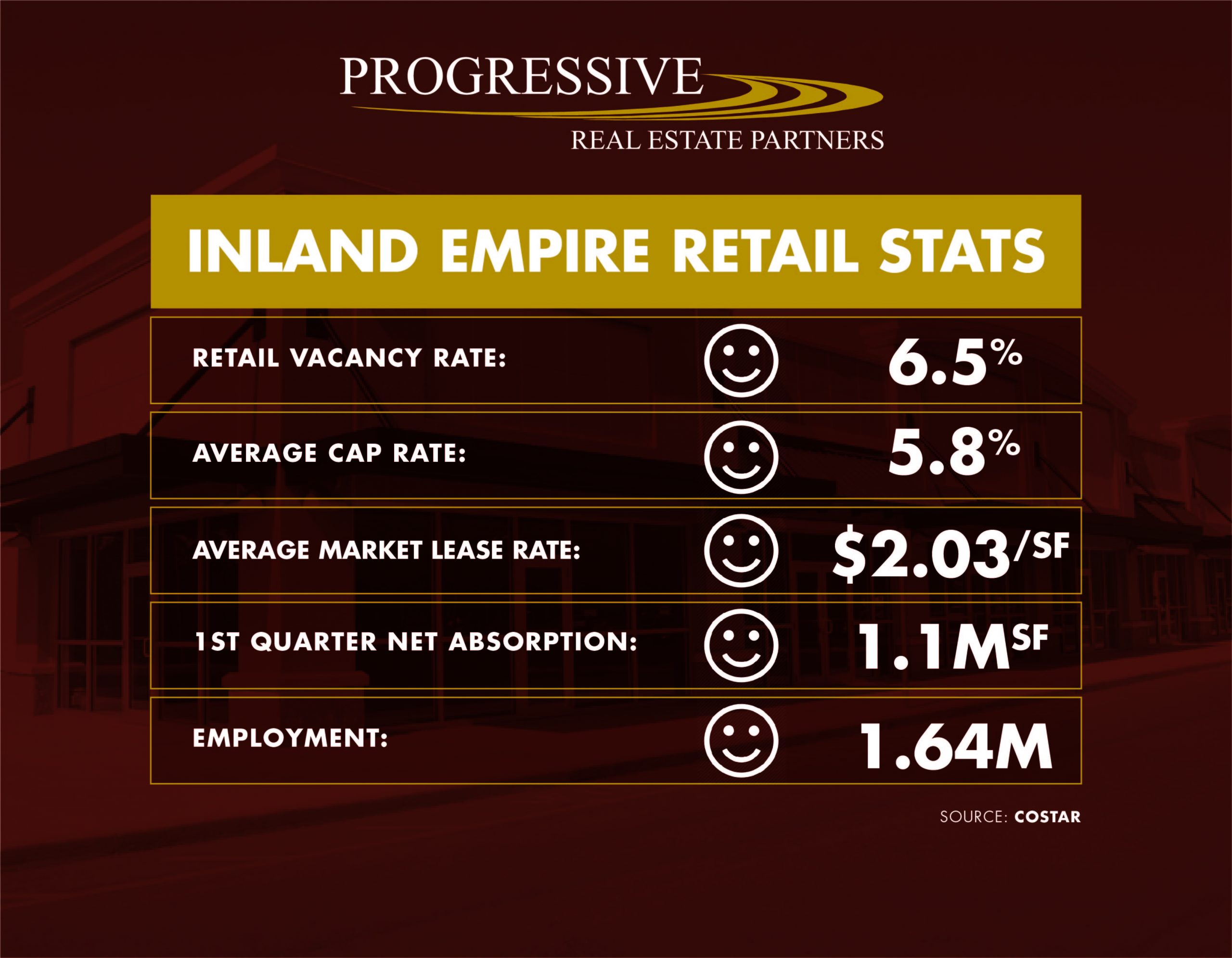 As a SoCal Inland Empire Retail Specialist for the past 30 years, I have seen this relationship “through sickness and health” and I am pleased to say that we are in very healthy times. The following provides some of the vital statistics demonstrating the health of this market as well as the underlying conditions that are contributing to these healthy times.

Investment Sales Volume: There was $600M in completed sale transactions in the 1st quarter of 2022. This followed $930M in the 4th quarter of 2021. BOTH were record quarters. What prompted these record numbers included the return of large transactions which were mostly absent for the previous two  years since it took most of 2021 to stabilize rent rolls as a result of the pandemic. Included in these sales were the Countryside Marketplace in Menifee for $121M, the Inland Empire Center in Fontana for $71M, the Shops at Dos Lagos in Corona for $47M, and the Country Fair Shopping Center in Chino for $42M.

Lease Rates: The market rent as determined by Costar has crossed the $2.00/SF/month threshold for the first time ever. I am always hesitant to state such a figure because it could cause people who are getting $1.50/SF rents to think that their rents are under market and those getting $3.50/SF think that I am undermining the market. This “market rent” is a rent across all product type in all geographies of all sizes. It is much more like the Dow Jones index than it is a true “market rent”. This figure is up over 20% during the past 5 years. Although nowhere near the growth in industrial or multi-family rents, considering the many comments about the demise of the retail market, these figures are quite positive.

Cap Rates: I state the average cap rate with some hesitation for the same reason as lease rates, but the overall cap rate has declined to 5.8%, also a record low. Despite this figure, there are many single tenant corporately leased properties with long term leases trading in the 3.5% to 4% cap rate range. Larger properties with spaces leased to big box tenants or older properties with a lot of shop space and deferred maintenance have traded in the 6 to 7% cap rate range. We are in a market where each property is so unique and they are being priced accordingly. This is a market where expertise in underwriting and marketing that our team provides creates pricing clarity.

Vacancy Rate: At 6.5%, this is the lowest retail vacancy rate we have seen since the mid 2000’s. Regional Malls, are experiencing a 14.3% vacancy rate which currently skews the overall rate higher. Strip center vacancy rates are below 5% making it more and more difficult for tenants to find quality space for their businesses.

Net Absorption: There was 1.1M square feet of positive net absorption in the first quarter of 2022. This figure has not been achieved since 2014 and in 2014, this was a unique quarter. Instead, the first quarter of 2022, continued a very positive trend that started in 2021. For the past 5 quarters, we have seen 3.43M square feet of positive net absorption. These net absorption figures will be harder to reproduce absent new inventory as a significant amount of the inventory that remains is amongst the most challenging to lease.

These metrics are all very positive and amongst the best we have seen in many years. The following outlines some of the economic indicators that are driving this growth.

Jobs: Unemployment is currently at 5.7%. There are over 1.64 million jobs located in the Inland Empire. Unlike Los Angeles County, the Inland Empire has recovered all of the job losses resulting from the pandemic and is now at its highest level of employment ever. This is despite the region still needing to add 20,000 leisure and hospitality sector jobs to reach pre-pandemic levels. These jobs do not include all the people that commute from the Inland Empire to Los Angeles, Orange, and San Diego Counties.

Home Prices: The median home price in Riverside County has grown by 29.2% year over year to $607,000. The median home price in San Bernardino County has grown by 24.6% year over year to $523,300. I remember many years ago that Dr. Michael Bazdarich, former Director of the UCR Forecasting Center stated that the one economic indicator that he pays the most attention to is home prices. His belief was that when home prices are rising, people are not only getting wealthier, but they feel wealthier, and they spend more. Not only have prices risen to make people wealthier, but many people were able to refinance and lower their monthly payments and thereby increase their spendable income. Combine this additional income with increased wages and government payments and it has been a good couple of years for many residents, especially homeowners.

Population Growth: Although we know that some people are leaving California, there are also many people that are leaving the coastal communities and heading east. According to the US Census Bureau, the Inland Empire grew by 47,601 people for the year ending July 2021. This places it 5th out of the top 50 metro areas in the United States.

Where Are We Going?

I know a recession is coming. I just don’t know when. I have spent my entire career listening to people in various time frames predict a recession only to be wrong by many years. I think that trying to time a recession is impossible. Sure there will always be someone who is right because even a broken clock is right twice per day.

For now, until we see a shift, we are going to assume that tenant and investor demand will remain positive and we hope everyone can further profit from this very healthy environment.